Correlation Analysis of Expression and Regulation of ceRNA

Correlation Analysis of Expression and Regulation of ceRNA

In 2011, a landmark article "A ceRNA Hypothesis: The Rosseta Stone of a hidden RNA language?" was published in the journal CELL. The author put forward the "competitive Endogenous RNA (ceRNA) hypothesis" for the first time and proposed a "new language" for the interaction of RNA molecules in the ceRNA transcriptome. The theoretical core of the hypothesis is: the existence of ceRNA, these ceRNA molecules (mRNA, LncRNA and pseudogenes) can compete with the same miRNA through the MicroRNA Response Element (MRE) to regulate the expression level of each other. The proposal of this hypothesis opens a new door for transcriptome research.

CeRNA has attracted much academic attention in recent years. It represents a new regulation mode of gene expression. Compared with miRNA regulatory network, ceRNA regulatory network is more refined and complex, involving more RNA molecules, including mRNA, pseudogenes encoding genes, long-chain non-coding RNA, miRNA and so on. It provides a new perspective for researchers to study transcriptome, which is helpful to explain some biological phenomena more comprehensively and deeply. It is of great biological significance to study the regulatory mechanism of tumor ceRNA, and it is of great significance for later disease diagnosis and treatment, drug development and so on. 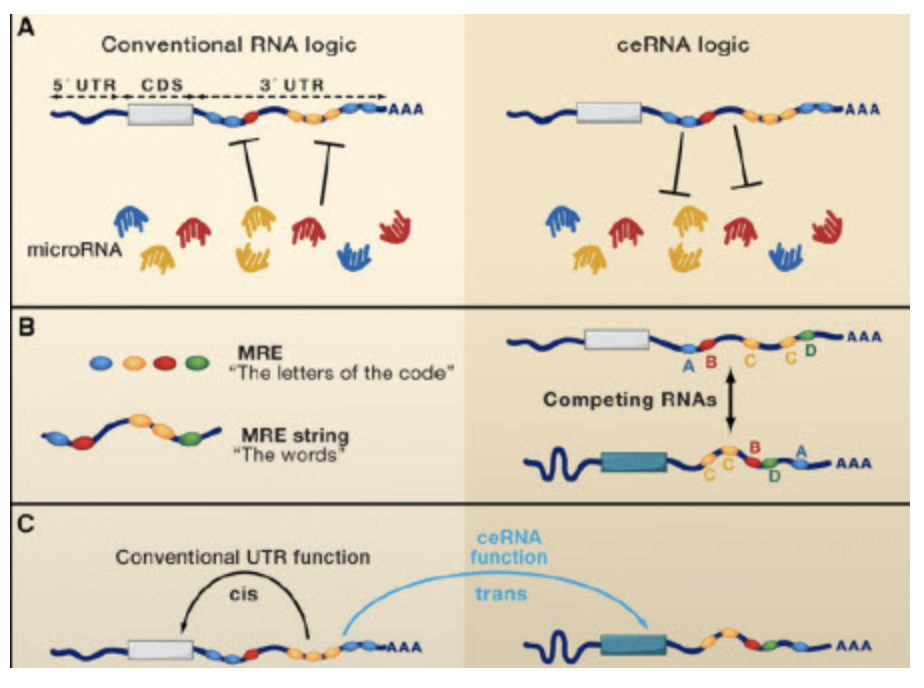 A) ceRNA has the same miRNA binding site.

B) ceRNA is regulated by miRNA.

There is a mutual regulation relationship between c) ceRNA, and the change trend of expression level is the same.

1. The expression information of mRNA, lncRNA, circRNA and miRNA in the tumor was obtained by sequencing, and the concerned RNA was screened by differential screening.

2. The target genes of miRNA, mRNA and lncRNA, that is, miRNA-mRNA and miRNA-lncRNA, were predicted by Miranda software. Similarly, the expression of RNA was used to predict the micorRNA-target relationship pairs composed of miRNA, mRNA and lncRNA, and the corrcoef function in python numpy library was used to screen the relationship pairs with high correlation. Combining the results of the two predictions, we take the intersection to improve the accuracy of the results.

4.lncRNA functional annotations (KEGG, GO): the lncRNA here regulates the expression and degradation of mRNA by competing for limited miRNA, which is called ceRNA. LncRNA and mRNA communicate through a shared miRNA, so they have similar functions. Hypergeometric distribution test was used to calculate the enrichment significance of these mRNA regulated by lncRNA in GO or KEGG items. As a function comment of lncRNA. 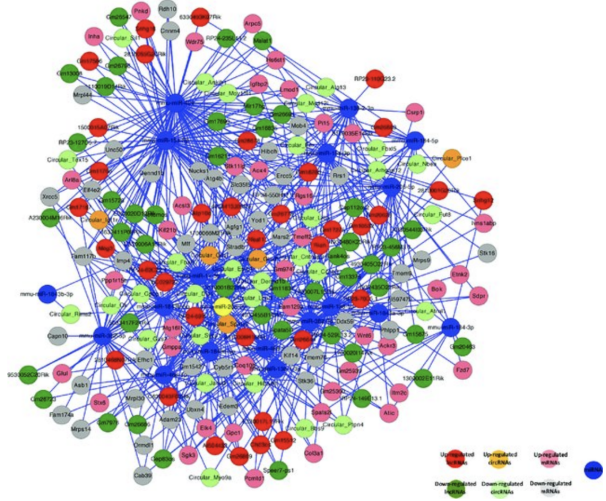 It is recommended that the starting dose of total RNA should be 60 μg, the minimum 30 μg, and the concentration ≥ 400 ng/ μL.

Sampling Kit: we provide our customers with a complete sampling kit, including protein and RNA separation kits, as well as tools for storing samples.