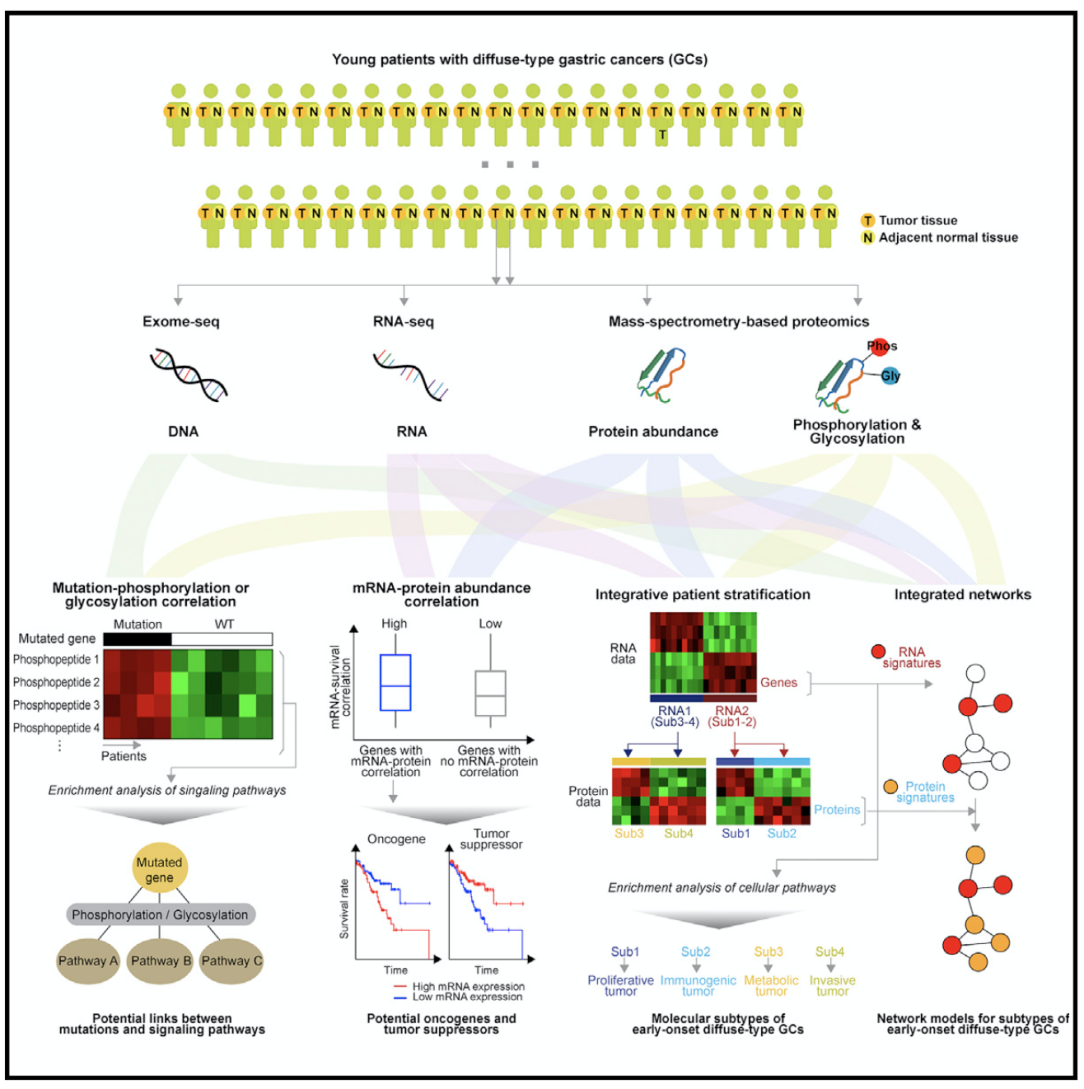 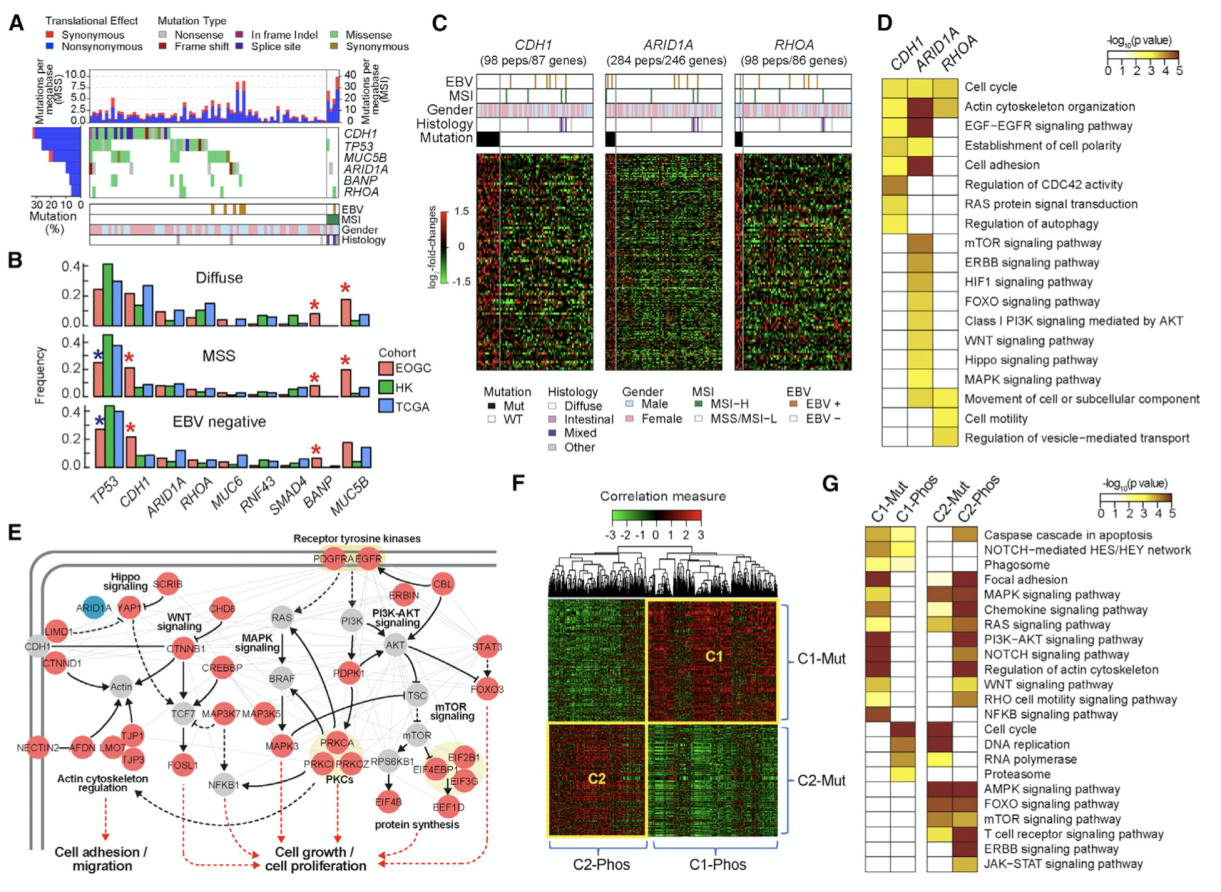 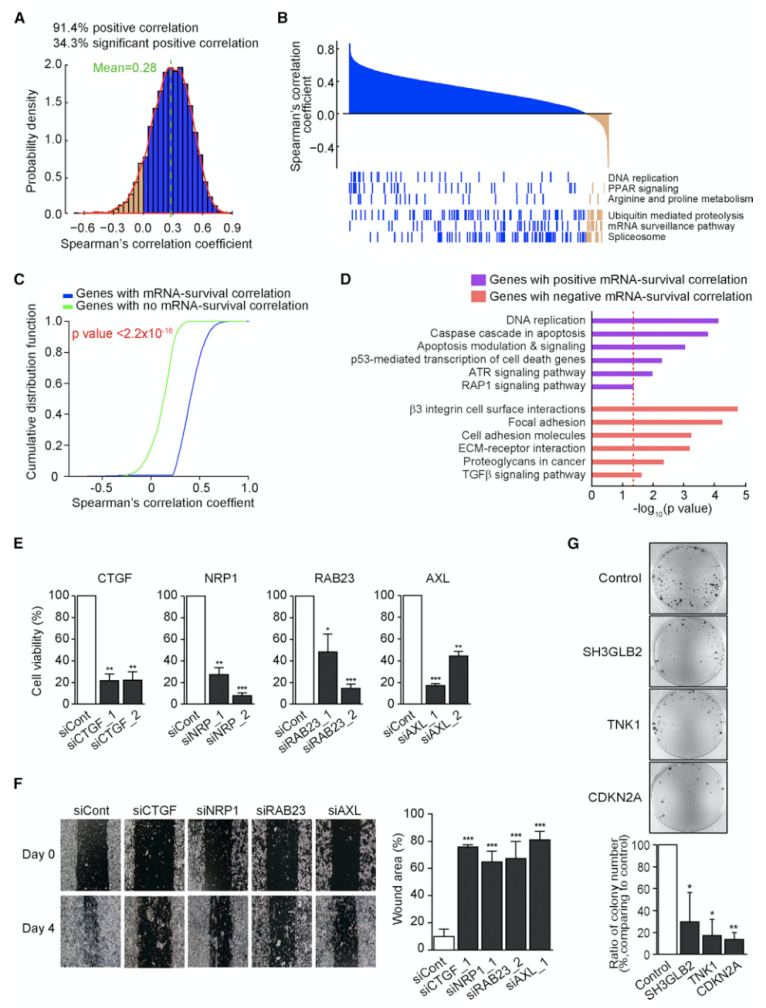 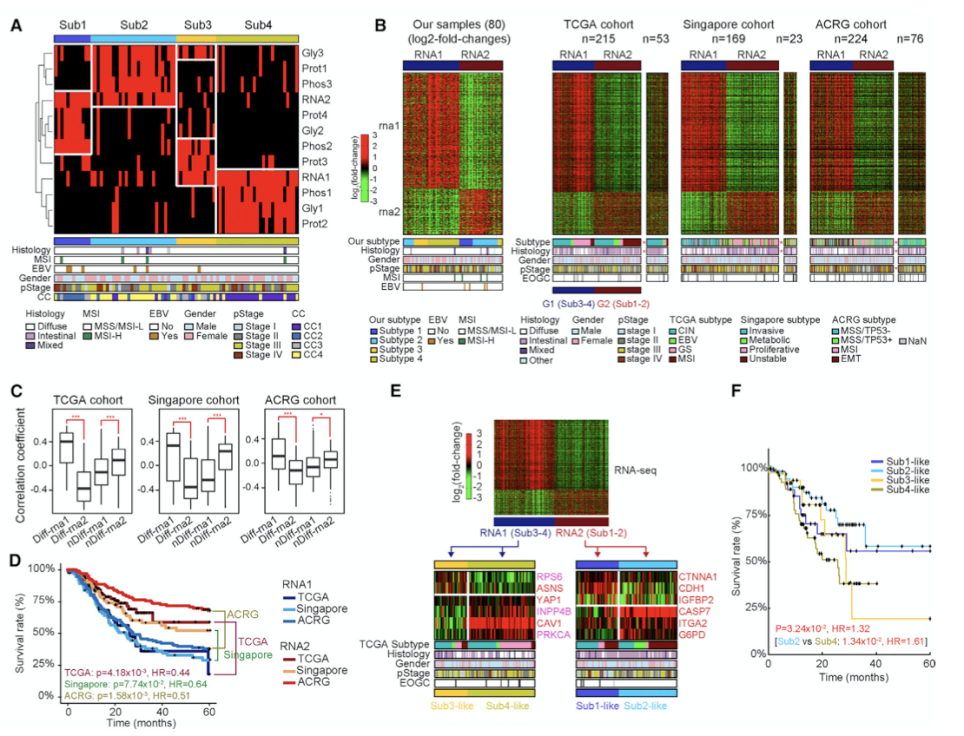 Subsequently, theauthors integrated proteomics-genomics to type EOGC to examine whether the mRNA and protein features of subtype-1 cohort-4 are reflected in other cohort and proteomic features. It can be seen from figure 3 that diffuse gastric cancer with poor survival and MSI gastric cancer with long survival are significantly enriched in RNA1 and RNA2 cluster, respectively. There was no significant difference between rna1 and rna 2 in EOGC and LOGC. It is suggested that the relationship between rna1, rna2 and survival time is similar in young gastric cancer and middle-aged and elderly gastric cancer. Proteomic characteristics, and mRNA characteristics, are not different in EOGC and LOGC, so they are suitable for both EOGC and LOGC. 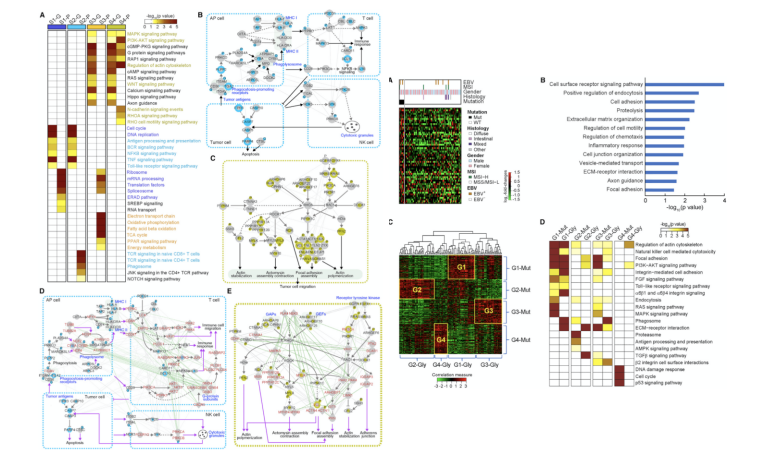 Next, from the EOGC cohort network of four subtypes, the author first found the genes and proteins of each subtype. With representative genes and proteins, look for cellular processes through ConsensusPathDB. Among the four common mutant genes, find those with significantly increased levels of glycosylation. Among them, the ARID1A mutation showed a correlation with glycosylated peptide levels in 80 proteins. These up-regulated glycosylation proteins are related to cell migration and immune-related responses. Strongly linked mutant genes and glycosylated proteins are grouped into 4 classes. In the same cellular process, those somatic genes with SNV are associated with glycosylated proteins, so glycosylation data, and similar conclusions to phosphorylation data, provide additional information on mutation-related tumor cell processes information.

The authors found that finding key mutations based on protein levels was no more effective than finding mutations based on high levels of mRNA expression. MRNA-protein correlation can be used to classify proto-oncogenes. Protein abundance, phosphorylation and glycosylation data provide complementary information to mRNA in cancer typing. The mutant gene overlap of EOGC and LOGC is very rare, which indicates that the mutation landscape of the two kinds of gastric cancer is very different. However, there was no significant difference in the expression level of mRNA between the two kinds of gastric cancer. However, there is a significant difference between diffuse and non-diffuse tumors at mRNA level. Since LOGC does not have protein data, it is not possible to compare the levels of protein, phosphorylation and glycosylation between the two types of gastric cancer.

The protein genome analysis in this paper provides signal pathways related to somatic mutations, proto-oncogenes and tumor suppressors. Based on the above findings, early-onset gastric cancer of diffuse type can be divided into two groups: good prognosis group and poor prognosis group, according to (1) whether the mRNA/ protein levels of 4 proto-oncogenes and 2 tumor suppressor genes are up-regulated or down-regulated. (2) according to the patient's mRNA and protein characteristics, whether the patient is assigned to subtype2 or subtype4.

Creative proteomics has an excellent team of experts to provide you with customized multi-group oncology-related experimental design and experimental solutions, so that you can experience the highest quality, the most advanced and the most satisfactory service.Help scientists in the field of cancer research to produce quick results and good results, so as to promote scientific and technological innovation. Creative proteomics, multi-layer assemblage customization service experts to help you with your scientific research!

* For Research Use Only. Not for use in the treatment or diagnosis of disease.
Gastric Cancer
Online Inquiry